It is useful to have a brief understanding of how we come to create ‘traumas’ to appreciate how Havening works in eradicating traumas.

How we create ‘traumatic memories’ – In order for an event to be traumatic, no matter how significant or insignificant it seemed at the time, it has key components that cause the memory of the event to become stored, or as the neuroscientists call it, ‘encoded’ in the brain as a trauma.

What makes up a ‘traumatic memory’?

These tend to be highly emotional events or experiences that in the moment we have taken to mean something threatens us. They tend to also be experiences that for whatever reason we perceive we can’t get away from. This can be literal, as in there is no means of escape in traumatic events such as violent abuse, being trapped, war zones etc. It can equally be about how we perceive the situation is not being able to control the situation or get out of it because the consequences would be too terrifying, which is of course just as real in a different way. Examples such as losing our job, a threat to a relationship, being abandoned by a parent etc. are just as real as being in a car accident and not being able to get out, or some other literal traumatic event.

The other component that means that we encoded these as traumatic experiences is to do with what is known as our ‘emotional landscape’ at the time. Simply put, this is what state our brain is in at the time of the event, formed by previous and current experiences, our temperament and how sensitive or vulnerable we currently are to stressors in our lives.

Due to all of this, the memory ends up being permanently encoded in this way in the fight or flight region of our brain known as the amygdala, meaning recollection or new, similar events occurring will reactivate a significant, emotional response often is though you’re reliving the initial experience for the first time.

What Havening Therapy ® does 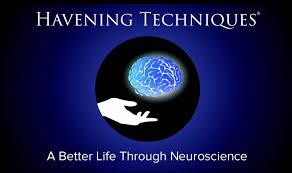 A memory is made up of lots of different sensory and cognitive information that is stored in the brain with it, including the emotions felt and the effect that they have on the body. Every time the traumatic memory or experience is re-accessed through recalling it, or experiencing another event that is similar enough in its stimulus, there are certain receptors in the area in which the memory is stored that become activated (known as potentiated). It is these receptors that are responsible for linking any similar event to the extreme emotional response of the initial memory, by allowing fast conduction down that memory pathway in the brain straight to the emotional response. These activated (potentiated) receptors are like the vital link in the chain between the stimulus of the traumatic memory and the emotional response.

The therapy, through Havening Touch ®, sets off an electrochemical chain reaction leading to the permanent removal (in medical terms, ‘depotentiation’ or internalisation) of these receptors. It is this removal that permanently disconnects the recalled memory from its emotional content, therefore detaching you from the event, and the memory being encoded in a different, non-traumatic way. After the process, you may remember the memory or the event, however the emotional response is no longer there. This means you may still be able to recall the memory, perhaps with some extra or different information that you didn’t have access to before. Or it may seem more distant or harder to recall, but, most importantly it will no longer have any negative emotional impact. It will be just like your normal memories.

Havening is not just for isolated traumatic memories. There are other types of Havening techniques ® that can be successfully used for repetitive negative emotional experiences that have led to unwanted or unhelpful emotions as adults. It can also be used as a great tool for anxiety and stress as well as for a multitude of positive changes. You can find out more about how it may help you here.

What are the origins of Havening Techniques ®?  Havening (also known as Amygdala Depotentiation Therapy (ADT)) was created by Dr Ronald Ruden, a medical doctor with a specialization in neuroscience and emotional trauma. He is also a published author on trauma and addictions. Havening Techniques came about when he observed a colleague receiving another form of ‘psychosensory’ therapy, EFT, for a phobia. Intrigued by the effective result he worked for over 10 years with his brother Steven Ruden to explore the science behind this approach and with the results, developed the powerful and effective Havening Techniques ®.

Does Havening actually work? What’s the evidence for Havening?

Yes, it does, as there is a body of published evidence of Havening being used with PTSD war veterans and thousands of case studies collated over the years. Havening has significant empirical evidence and published research to show that it successfully works on trauma, such as phobias, traumatic memories, experiences and events through to the PTSD. Internationally, there are now tens of thousands of case studies providing a strong body of anecdotal and journal evidence to support its results and worthiness as an effective, efficient and innovative form of therapy.

In my own Thinkshift clinic, the results since August 2018 that I have witnessed first-hand with my clients are remarkable and I continue to be surprised and excited about how Havening has helped me and my clients.

Is Havening a therapy for me?

For some people, the idea of touch treating trauma or phobias may seem strange or unfamiliar at first, especially those who have sought assistance from psychiatrists and psychologists. The overriding objective of Havening is to provide a feeling of calmness and safety to the client, to literally create a safe haven. We instinctively and intuitively embrace these basic tenets with others including our children and partners, when we feel the need to comfort them or make them feel safe. If you have a pet, children or are naturally tactile you will know the response that your gentle touch has on others.

In today’s society touch has become less familiar for some, yet there is a wealth of evidence showing its benefits: the release of positive hormones and calming electro-chemical effects it has on our brain and body, be that in the form of massage or Havening. You don’t need to believe in it for it to work: as even the most apprehensive or sceptical clients find themselves surprised and feeling calm, peaceful and great at the end of the process. Many are also a little confused as to where their symptoms have gone!  The Havening Technique and the underlying science does its job without the involvement of our rational mind, as long as the client is willing to engage in the process, regardless of their beliefs.

To find out more about our services and how Thinkshift can help, please contact us on 0433-273-799 or send us a message.